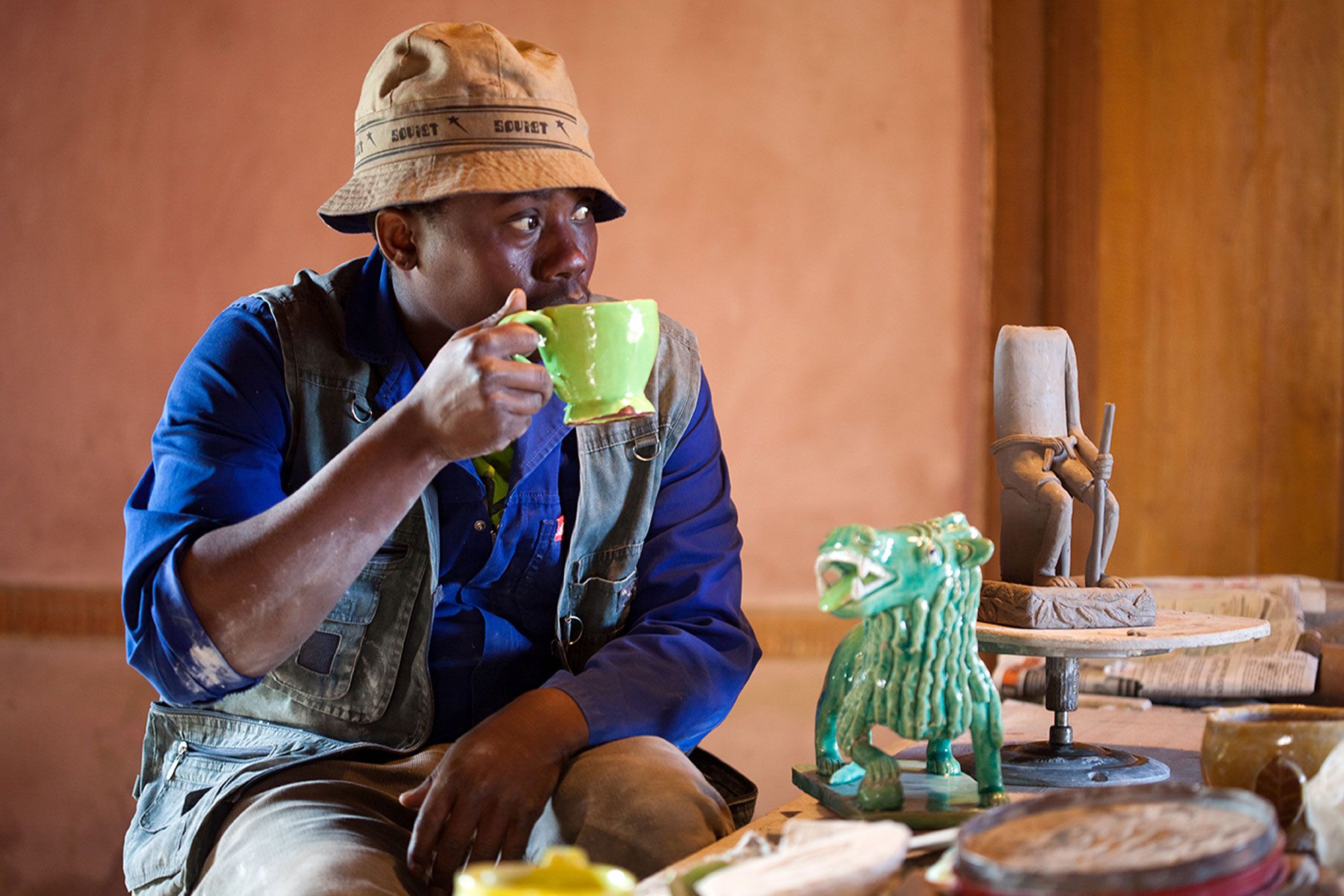 “As I walk to work, on this gravel road, with the sun coming up over the karoo, I make a promise to myself to try something new, every day” says smiling Nico Masemula. And his experimentation and passion are evident in all his quirky ceramic work.

Smooth rabbits, fierce cats, and smiling lions are amongst his growing collection of art, which dominate a table in the middle of his rustic studio in Calitzdorp. Ready for dispatch to the up- market Anthropologie collection in America, his ceramics are fast becoming items of value in the competitive world of art collection.

“I got a few lucky breaks in my life”, he tells me with a serious look. “First, it was meeting Hylton Nel, when I was still at school. My mum, and Hylton’s then gardener were friends and I used to go and hang out with them after school. Then, when I left school, I didn’t really know what to do, so Hylton suggested that I start making cups at his studio”.

“Ah, I made so many cups” he says. “And boy, they were successful – Lots of people bought my cups”. But there are only so many cups one can make, before the boredom sets in. His son began urging him to make rabbits, and dogs, and lions, and before the sun was setting, Nico began crafting his signature pieces.

His second break came from Trent Read of Knysna Fine Art who gave him his first show in 2007 and it was then, that his name and his work began creeping into the hearts and minds of critics and collectors.

Trevyn McGowan of Source, was amongst one of these and his third break occurred when Trevyn commissioned Nico to make some pieces for Anthropologie. Nico is, it seems, well and truly on his way to greatness.

Working side by side with Hylton Nel has of course, influenced Nico’s work to some extent, but for the most part, he tells me that he puts his heart and soul into the clay and “…if I do that, then something beautiful will always come out”. His inspiration comes from God, from the beautiful silence of Calitzdorp, and from his need to tell stories. His work is both wonderfully narrative and deeply thought provoking.

I ask him if he and Hylton ever argue? “No, I don’t like to argue – I like to listen and to watch” he responds. “We share this small shed and often work in silence, side by side. Hylton has been the greatest teacher and friend I could ever ask for”.

And there is indeed, a feeling of peace that reigns in and outside the studio. The sound of clay being thrown and molded merges with the sounds of nature and one gets a very real sense that there is something special going on, here in Calitzdorp.

“My aspirations?” he asks quizzically – looking at me through his white bright eyes. “Yoh!, my work is in America and I am humbled by that – Can you believe it ? – How much more do you think I want”? A little grin shows how proud he is.

And so, he should be.! Nico Masemula has the sun on his back as he moves into the limelight.

Note: Nico Masemula has since passed away.